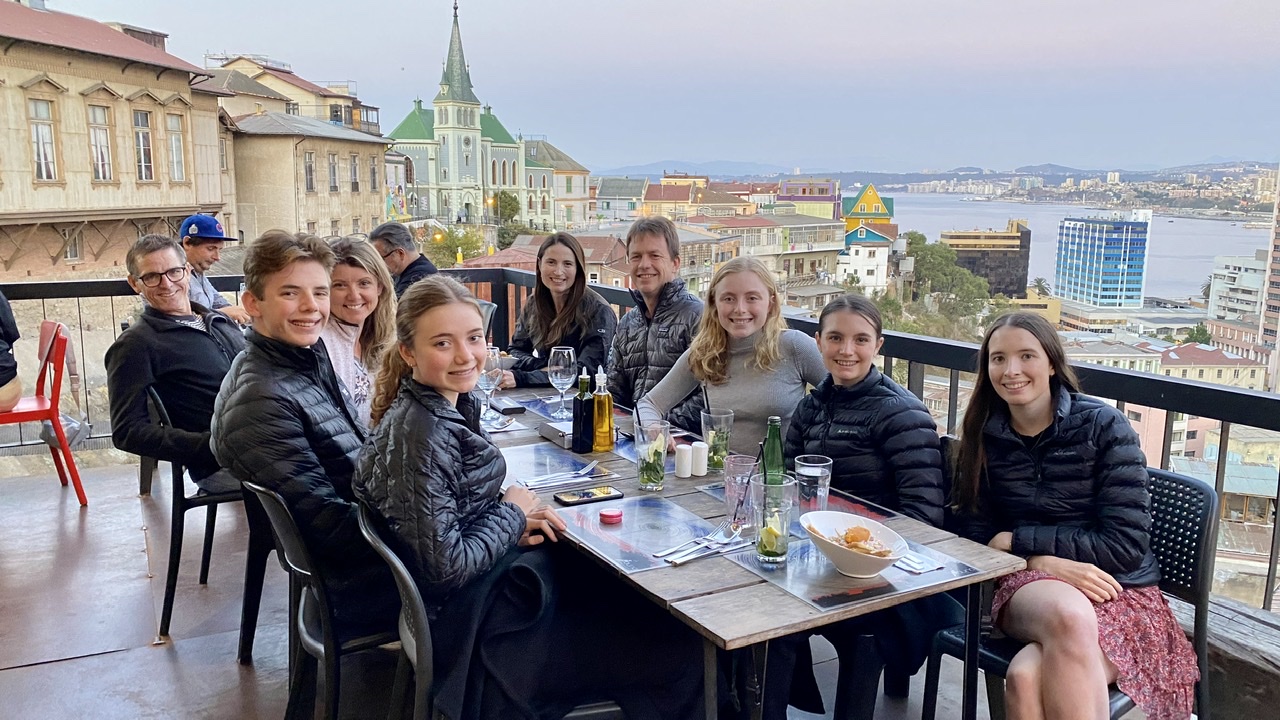 We had been warned that Valparaíso is the centre of a lot of unrest and that we should be careful. There has been a lot of agitation for there to be a change to the country’s constitution and calls for the President to step down.

Hotel Fauna, our home for the next 2 nights was positioned perfectly. A spectacular view over the bay but still seemingly in the middle of the action. We found a Brewery Altamira (the first brewery in Chile) at the bottom of our ascensor (funicular) and had beers and burgers for lunch, before heading to the Sotomayor square for the 3pm highlights walking tour, finding our red and white stripped ‘wally’ guide. In the first 15 mins she had to resort to ‘plan B’ as some students who were sitting a national exam burnt their papers in protest of the ‘system’ and it was not advisable for us to head in that direction. We wandered through the steep, narrow, cobblestone streets of Cerro Alegre and Cerro Concepción, listened to some history and saw some fabulous street art, most with a story to tell. Like most other towns we have visited there is an abundance of street dogs, in fact one adopted us on our walk and viciously barked at and chased anyone that came near our group. There were many cats sitting high on roofs and on window sills surveying the scenery.

Dinner was at the hotel’s restaurant with superb views over the bay. It was one of the best meals we have had on the trip.

Valparaiso became an important port in the 1800s and it gained particular importance supporting and supplying the California Gold Rush (1848-1858). Ships passed through on their way around Cape Horn, of the Strait of Magellan which was the main route connecting the two sides of the Americas. Immigrants from all over Europe flocked to the bustling port city, but with the completion of the Panama Canal in 1914, Valparaiso was suddenly a long way from key shipping routes and fell into decline during the 1900s. Valparaiso was also hit by major earthquakes in 1822, 1906 and 2010 testing the resilience of its residents.
Valparaiso was declared a Unesco World Heritage Site in 2003, thanks to its historical importance, natural beauty, and unique architecture. Valparaiso is the birthplace of many historically significant figures, including Augusto Pinochet and Salvador Allende. It has also been the residence of many artists like Pablo Neruda and Nicaraguan poet Rubén Dario.
Valparaiso is famous for its nightlife, especially its bohemian pubs and bars where poets, writers, tango aficionados, sailors, university students, and just about everyone else spend hours drinking, dancing, and socializing well into the early morning hours. In fact, it was 5.15am until the noise stopped on our first night.

We had another late start to the day, trying to fit in with the locals. We decided to embark upon our own self guided walking tour that had us walking uphill to start with in a residential neighbourhood that still had amazing street art on almost every surface. The construction of the houses in this less affluent area did not meet any type of building code. We wandered back down our hill for lunch at La Concepcion, whose view across rooftops, down the steep hill and across the bay made us feel like we were in Greece. The food was all brought out covered in closhes for the ceremonial unveiling of our beautiful meals. The girls continued looking at the shops while the boys had siesta.

Pasta E Vino for dinner and watching some breakdancing in the public square near our hotel ended our day.

We had a leisurely breakfast up on the terrace and looked out over the hazy morning.   A Chilean newspaper had reported that the haze over Valparaíso was caused by the smoke for the Australian bushfires making its way across the pacific.

We dragged our bags through the cobblestone streets to our cars and set of to Viña del Mar, sister city to Valparaiso.  It really is just like a continuation of the same city but once we were past the reloj de las Flores (Flower Clock) it seemed vmore like we had been transported to movie set at Santa Monica Beach.  The main road, palm trees and white sandy beach with beach volleyball, personal trainers taking exercise classes and at the Playa del deporte (Sport Beach) there was some sort of Latin American zumba class over looking the beach.  Izzy, Bel and Kate joined in for a bit before we headed further north to Reñaca and the Colombo sand dunes past the hotels terraced into the side of a cliff.