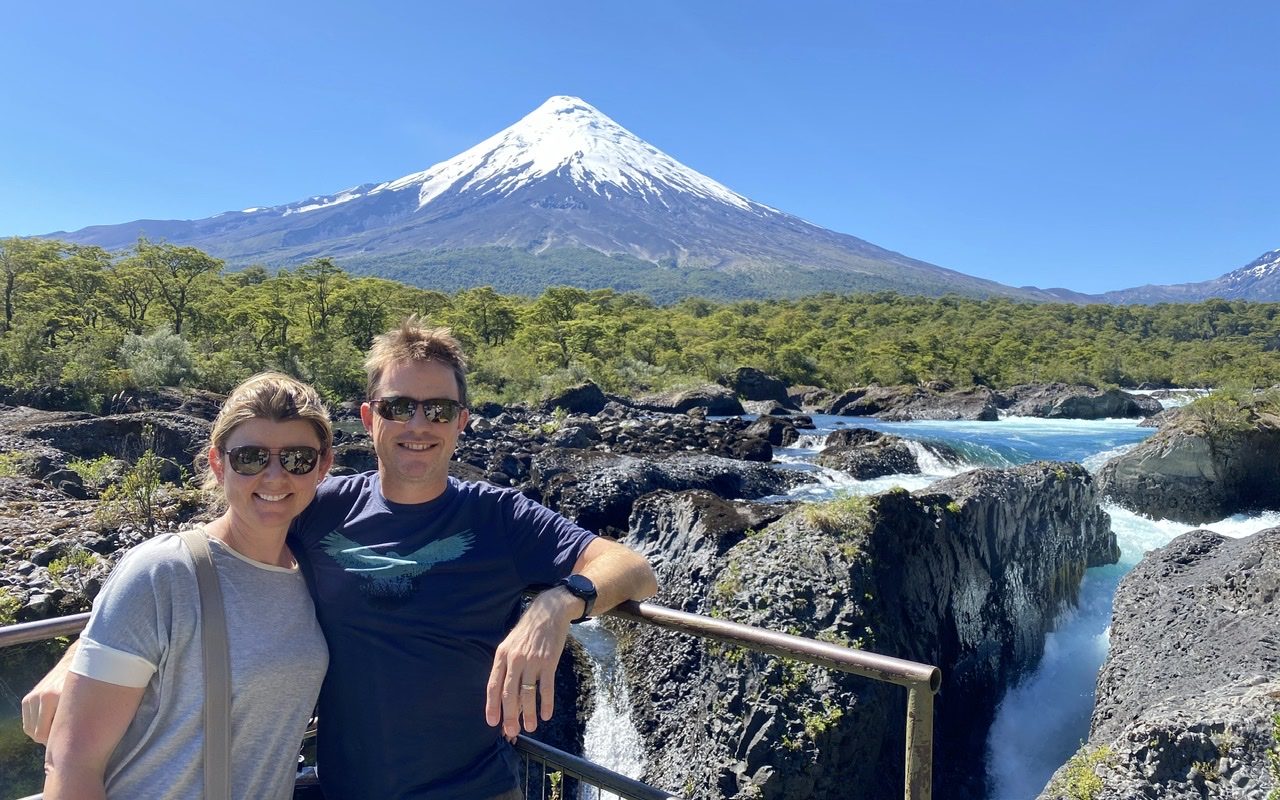 We were picked up at 8am by our friendly old tour guide that had driven us to Puerto Natales. This time, thank goodness he was only taking us to the airport, as we heard much the same spiel as we had heard from him before, repeating the pertinent points.

Flight number 10 was uneventful, although no food. We attempted a coffee at the airport in the hope in would be palatable – disappointed again. On arrival in Puerto Montt we picked up our hire cars and hightailed it out of there heading straight to the “Lake House’ Scotts in a rear wheel drive van and the Jardines in a compact Peugeot.

Our plan was to visit the supermarket, grab supplies for the next few days as we were looking forward to some home cooked meals. Every supermarket in Puerto Varas was closed, but we had to find food. 300m down the road we came across a quaint looking German style cafe and thought we would give it a go. Once inside, it was more reminiscent of the Bates Hotel, or the witches cottage in Hansel and Gretel. The door was locked behind us and Kate was convinced that the noises of the blender were the previous customers being disposed of. She therefore did not eat.
We made it out alive and made our way back to Puerto Montt 1 hr away and about the same use as Toowoomba. It is a bigger town, so surely there would be a supermarket open. It was a boarded up shithole – the only food we saw available was a guy pushing his fairy floss cart up the hill. For the second time we hightailed it out of Puerto Montt vowing never to return except to go to the airport.

Driving through the centre of Puerto Varas we found a corner store open and after dodging the aggressive beggars out the front, we bought pasta, tomato paste, frozen chopped garlic, onion and capsicum, beers and wine and went back to the house to make our first home cooked meal in a month.

The lake house was not on a lake, but in a weird gated estate. The owner was lovely and it has plenty of room for us all so we ate our pasta and had a chilled night at ‘home’ listening to the sounds of a much needed washing machine.

We woke at our AirBNB house after a sleep in and had BBQ bacon and egg burgers for breaky. Great start to the day, with the sun bright and warm, and not a cloud to be seen. We were ready to explore this area that is called the Switzerland of Chile. Lake Llanquihue is 35km in diameter and surrounded by snow capped Volcanoes, the most prominent of which is Volcán Osorno which is said to be the most perfectly formed volcano in the world. It last erupted in 1869.

The Volcano did not look far away but the given we are staying at about 70m elevation, and Osorno is 2652m high – not a bad ‘hike’ for the day.
Arriving at the ski-fields (at 1250m), we elected to purchase lift tickets to take us the last 400m in elevation – after a coffee.
Spectacular views from a somewhat dilapidated ski-field, the double chair up was slower than walking – but worth it. We were able to walk around the ‘red crater’ (Rojo Crater) and there are no trees on the ski field – all being old lava fields.

Near the top was a monument to the lost German and Chileans who in late January 1987 (mid summer) lost their lives – freezing to death at the bottom of a 100ft crevice in the Glacier close to the top of the mountain. The weather is unpredictable…. for us if was close to 20 degrees at the 1650m mark.
The top half of the ski-field still had some slushy snow – we had great fun sliding down on our butts, with Kate, Abi, Will and Simon sliding half way back to the Ski-field base – and Simon in the process, tearing the butt out of his hiking trousers.

We then stopped for lunch of burritos and hot chips at the Refugio on the slopes – with great views over the lake and mountains.
We dropped by the Petrohue Waterfalls on the way back (on the Petrohue River, some 15km from the volcano) – but perhaps spoilt by Iguazú Falls, we were entertained, but not enthralled for long – and an ice cream was needed as we headed back to the ‘lodge’.

We are really getting aclimatised to this South American lifestyle with everyone staying in bed until 9.30am. We decided to have a lazy day and as the sun doesn’t go down until 10pm we have so much of the day ahead.

We headed into Puerto Varas at about 4pm where we saw the local constabulary dealing with a minor oil spill. We walk around the pretty town, had an ice cream and tried some empanadas before heading ‘home’ for chicken curry and cards.

An early meet at the local servo for our whitewater rafting down the Petrohue River (grade 3 rapids for 9km). Nailed the weather – cloudless skies with a brisk 14 degree breeze. Arriving at the depot, we were doled out damp gear – which the girls were particularly unimpressed with – having to get into musty steamers several times to big and wet suit boots.

From the depot it was a short bus ride up the valley beneath the Osorno Volcano to the staging area below the Petrohue Falls we visited a couple of days ago. Following a quick safety briefing from Juan (with special mention of the Patagonian March Fly that would be joining us on the ride) and the obligatory free photo, jumping in our gear in front of the Osorno Volcano, and we were launched into the very cool waters with a couple of smartly conducted practice manoeuvres and we were off.

Fantastic fun – Scott’s and Jardine’s in separate IRBs, Scott’s joined by ‘Gru’ from Despicable Me. We each took turns at the front, we nearly lost Will (pulled back on board by the guide) and having to keep half an eye on the rapids, half an eye on the exposed areas of skin for the March Flys and the ears peeled for paddling instructions – it required concentration. A half-way jump from the side cliff into the river for a dip (and photo, of course) – with Kate face planting from 5m and fighting hard to hold back the tears – and we galloped down the rest of the rapids yahooing all the way.

Back at the staging depot – Luke proved his Mr Miagi skills, with more than 7 March Flys dispatched in quick succession – s**t there were a lot of them and apparently only around for the first 3 weeks of Jan each year (promise!).

Lazy afternoon for the kids, while the adults headed to circumnavigate Lago LLanquihue – some 3 hrs driving. Various vistas of German inspired farming and buildings most with views of the 4 volcanos across the blue lake and many a local enjoying the sunny Saturday arvo at the beach. Our visit to Frutilla Bajo was the highlight of our tour with a timber music hall overlooking the lake and the volcanoes, and plenty of beach goers enjoying the cool waters of the lake on a summers day (more reminiscent of a winters day in Brisbane)