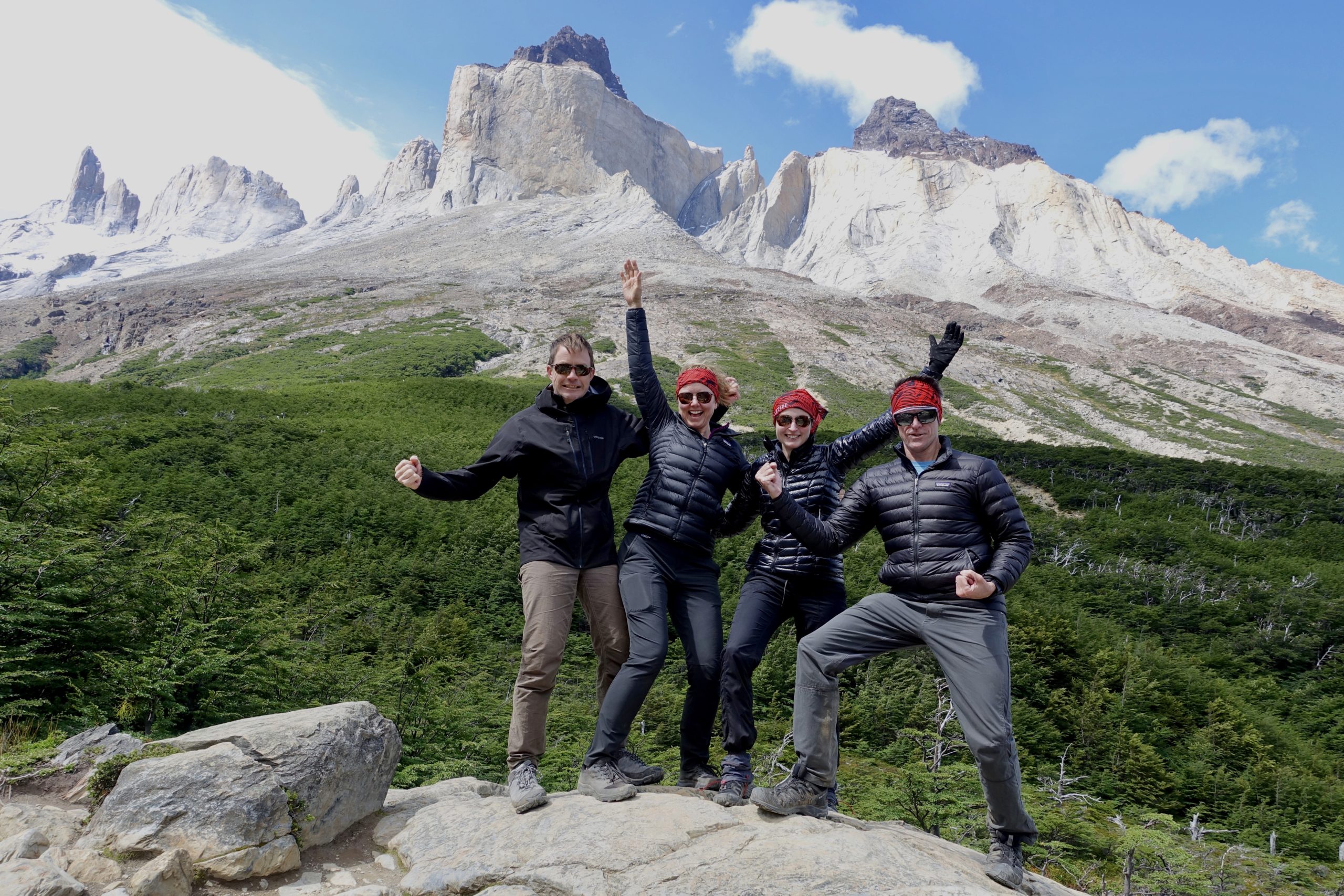 Left Puerto Natales at 7am, hiking gear packed and suitcases stowed at the hotel for our 1.5hr drive to the Torres del Paine National Park (Towers of Blue). Along the way we saw Rea, Condors, Caracara, Flamingoes, Hares, Grey fox with her babies, loads of guanacos and a the beautiful Sarmiento Lake with a ph of 9.1 and it’s shoreline of Thrombolites. In the distance we could see the towers that were our goal for the day and were excited to get a closer view.

We arrived at Torres Central Refugio, left our non essential gear to start the “W” trek. Today we were walking the right arse cheek. It was a steady up hill climb past horses carrying supplies and foxes just walking by. We dodged lose rocks and horse poo on the way to Refugio Chileno. As we reached the camp the weather started closing in, so we donned our rain gear as we walk along the Ascensio Valley.

After a snack we started though the forest and the mud towards the moraine. It was an unrelenting muddy ascent and then we hit the open moraine. It got windier, steeper, wetter and busier with loose rocks and gravel giving way under our feet. The closer we were to the top the cloudier it became diminishing our hopes of seeing the towers. The last km seemed to go on forever and Nat and Tania we not feeling 100% to start with so at this point it took every bit of strength to keep going.

We arrived at the towers not able to see them, however it was still a spectacular sight looking at the glacial lake 1.5km across in an amphitheatre of granite walls.

We attempted to take shelter behind a large rock and eat lunch – Abigail’s fingers were too cold to remove the wrapping from her sandwich or zip up her jacket as with wind chill it was well below zero. Izzy was feeding Tania skittles and Tania might have cried a little. We forced a smile for a team photo and then got the hell out of there.

Half an hour into our descent the clouds parted, the sun came out and we could see the tops of the towers, but no one was keen on a repeat climb.

With our noses pointed to home we were on a mission to make it back to the refugio and get warm. We used every piece of equipment we had.

For most of us we had a glacial shower. Dinner consisted of tasteless eggplant soup, luke warm chicken and rice, tiramisu (cold of course). A round at the bar was $100 but worth every cent – the night ahead was not a peaceful one. The Scotts and Kate were in a 6 bed dorm, Luke Tania and Izzy were on school camp with three strangers.

The sun did not set until 10.30pm and the cacophony of sounds continued throughout the night. Snoring, coughing, sleep talking, drunk Brazilian man, door slamming, those celebrating the completion of the “O”, early rising American man, towel dispenser in the toilets that never stopped. A perfect preparation for the next day’s walk.

We left Torre Central at 7:45am for the 50min bus ride to the boat on Lake Pehoe, departing at 9am to take us to Paine Grande, where we were starting our walk up the butt crack of the ‘W’. This part of the trek took us via the Italian camp and up the French valley to the French Glacier lookout.

Unfortunately, due to a photogenic Guanaco family and an excessive number of fellow hikers lined up, we were denied entry onto an already overloaded boat. The captain was reassuring that he would be back within an hour, however this was clearly South American time as we did not leave until 10:45am on the next boat. It was a frustrating, cold and windy wait and we still had 21km to walk that day. The trip over the turquoise lake was made more difficult by over 50 knots winds which blew the lenses out of a ladies glasses.

Paine Grande Refugio was in a spectacular location and as much as we wanted to stop and relax in the cosy bar area Javier had us marching on as we were already running 2 hours late. The start of the walk was through burnt lenga forest. The fire was started in 2011 by an Italian man burning his toilet paper. It spread across lakes and destroyed large areas of old growth forest and will take hundreds of years to regrow. The dead white tree trunks were obvious as we walked to the Italian camp. The wind was ferocious and unpredictable. Tania was blown into a spiky bush and we were astounded to see water being whipped off a lake in spirals, it felt like it was raining. We crossed a single person suspension bridge into the camp for a brief snack and onwards we marched.

The climb was not as arduous as yesterday despite there being more vertical as it was not quite as steep and the weather was fine or maybe we were just wind assisted. It was a very pretty walk with rushing waterfalls, views back to the glacial lakes, lush forests and and views up to the glacier. When we emerged from the tree line it was breath taking. On one side a huge hanging glacier, on the other the famous “Horns” and down the southern valley to Lake Pehoe. We took our time having lunch in this spectacular place, while hanging on to something when standing up. Izzy was wished a happy 18th birthday in a memorable and beautiful part of the world.

Once again noses pointed to home and the boys announced it was way past beer o’clock so down we went.

In the evening we celebrated Izzy’s 18th with Calafate sours and card games.

Our final day walking the W trek, the left butt cheek. It was a beautiful warm, fine day. We were walking from Paine Grande to Grey Refugio along Grey lake towards the glacier. The water really was grey, even the water we were drinking. There was different scenery again with perched lakes, woodland and icebergs floating by. The views up to Grey glacier were glorious under fine skies with jagged mountain peaks surrounding us.

The Refugio was still a welcome sight and was tucked at the base of the mountain in a sunny sheltered meadow. Many hikers were happily sunning themselves on the lawns and decks. Lunch was enjoyed at the glacier lookout 500m further on. A large part of the glacier broke off a few months ago and the bay was filled with icebergs.

The day was not yet over though. After an hours rest Javier announced it was time to head to the two hanging bridges installed 2 years ago by a wealthy American. To cross these steep gorges previously you had to use a ladder system that was dangerous and time consuming. Abi and Kate staged a mutiny and declared that “we are not walking any further”, so stayed behind.

Tania, Nat, Izzy and Bel made it to the first hanging bridge and decided we had seen enough so after the obligatory crossing back and forth for photos the girls headed back. Javier and Sebastian picked up the pace with Luke, Simon and Will in tow to the second bridge. This one was even higher and closer to the glacier. It challenged Luke’s fear of heights and he thought he may need new pants. The view of the expansive glacier was worth the extra climb as was seeing a group of woodpeckers.

The boys were warmly greeted on their return as they had managed to forage chocolate and instant noodles from the Refugio shop. Celebratory drinks were had by all to commemorate the end of the trek.

This morning the nine tired hikers woke up at Grey Refugio to pack our bags in time for the boat to take us down to the bottom of Grey lake.

While waiting for the vessel to become more than a little speck on the horizon, we relaxed and played on the beach adjacent to the easternmost face of Grey Glacier. The small icebergs washed up on the beach provided interest for a while, including photo shoots and games of break the iceberg with a rock. Our guides, Javier and Sebastian showed off their duet yoga moves, and the rest of us gave this a go, to varying degrees of success. Before long, the boat arrived, and building cairns on the beach was no longer necessary to keep us occupied.

On the boat, we cruised around massive icebergs and the central and western faces of the glacier, although not hearing or seeing any action from the glacier itself. We all enjoyed our welcome drinks, with Calafate sours all round, while we slowly made our way south. Due to the shallow water found at the base of the lake, we were forced to walk several hundred metres across a rocky sandbar, with glacial winds hounding us all the while. Eventually, the whole crew made it to the car park, only to find out our driver had locked his keys in the van. As a result, we spent the following couple hours in the lobby of the Grey Hotel, once again trying to entertain ourselves. Despite Javier’s best attempts to get the driver to break the window, we had to wait for the spare key to arrive via hitchhike from Puerto Natales.

Finally, we began the hour and a half drive back to Natales, where we quickly dropped all our clothes to the laundromat before dinner. Javier and Sebastian met us at La Factoria for our last meal together, and we enjoyed mushroom linguine and seafood risotto, while the blinding sun slowly moved beyond the horizon. Once we had paid the bill, we exchanged goodbye hugs with our guides, and encouraged them to call if they ever found themselves in Brisbane. We returned to the Hotel, happy with our efforts on the W trek, but ready to pack our bags once again the following morning.