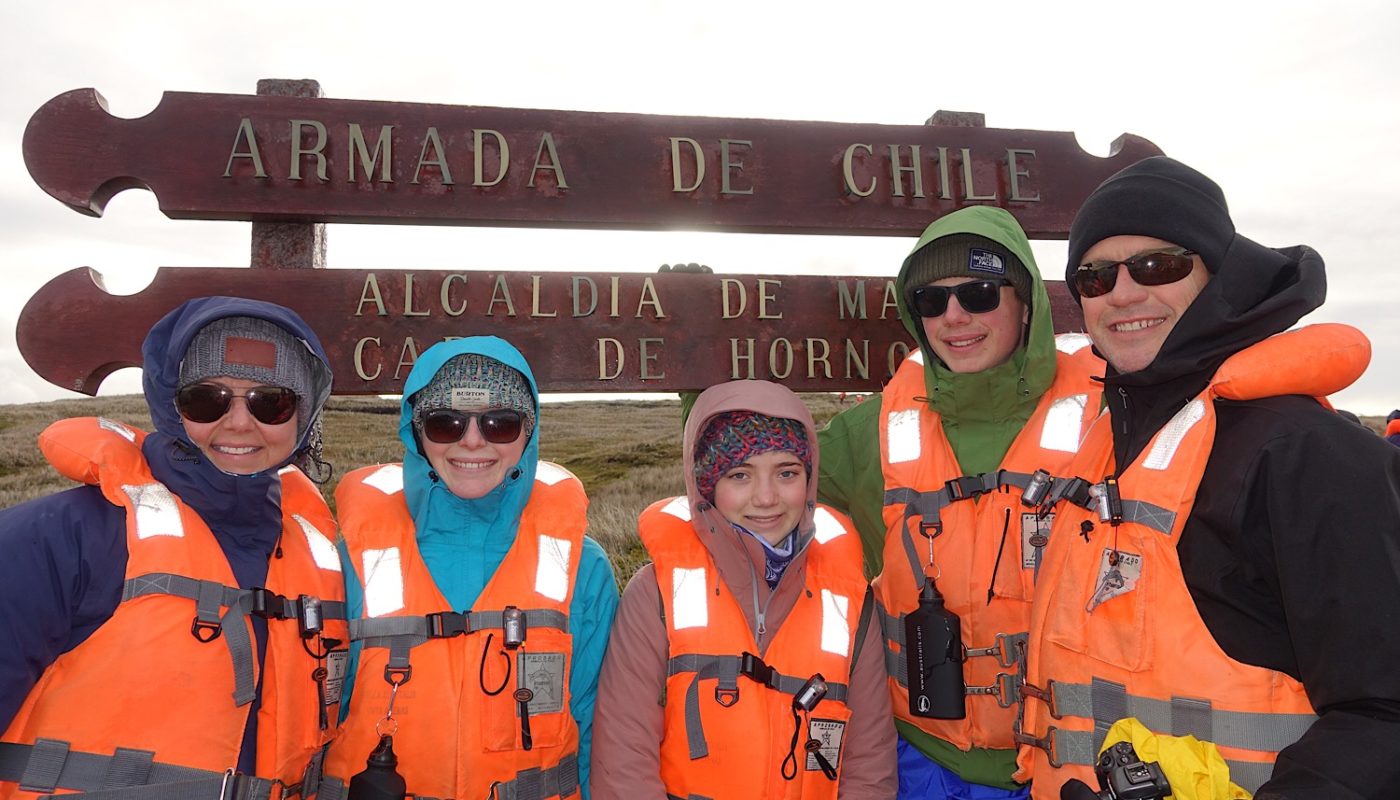 We sailed through the night, a few of us waking at 2am when the boat really started rolling and the wind could be heard. We were up at 6am dressed in full wet weather gear and life jackets, waiting to hear if the weather conditions were favourable for us to land on Hornos Island (Cape Horn). In 1616, Dutch sailors, Isaac Le Maire, Guillermo Cornelio and Juan Schouten rounded the cape that they named Höorn, (after the town from which they came and was also the name of their boat) thus opening a new route between the Atlantic and the Pacific. Cape Horn stands 425 meters high and dominates the landscape of the turbulent Drake Passage, which has taken the lives of around 10,000 sailors. It is the closest land to Antartica, which is only 956km to the south.

Luck was on our side with the winds easing to 35 knots. Entry on and off of the zodiacs was a well oiled machine with 2 frogmen standing in freezing cold water to stabilise the zodiacs when we landed. We climbed up to the Albatross Monument (A seven-meter-high monument and construction was carried out by the Chilean Navy under the basic premise that the structure would have to withstand gusting winds of more than 200 kilometers per hour). There is the albatross poem written in memory to the perished sailors.

The lighthouse is manned by the Chilean Navy and there is currently a family with 3 young children and a Daschund puppy who have moved in 2 weeks ago for the next 12 months. Apparently our visit was the first time they have seen other people since they had arrived. We thought we had seen all different types of weather until it started to hail!

Shortly after returning aboard, we headed north with the winds building back up to gusts of over 200 km/hr, lucky the weather had abated long enough for us to walk the Horn.

Wulaia Bay was described by Charles Darwin during his journey on the Beagle. The bay was one of the largest Yamana settlements in the region. We all hiked to the Summit for beautiful views of the bay and Darwin range, and also to enjoy some local fungus – Cyttaria Darwinii (Indian Bread). Then we were off in search of beavers, which along with sheep and pigs have damaged some of the local terrain.

We came across quite a small beaver dam and were lucky enough to see it’s 2 residents who were fortifying the dam walls with clump after wet clump of mud and grass pulled up from the bottom of their pond. Quite a mesmerising activity to witness.

On return to the beach we were greeted with a warming mix of whisky and hot chocolate – our new favourite post walk drink.

We returned late, so it was straight to the dining room for more calories and some card games.

This morning’s activity involved an IRB visit to the Pia Glacier, and short hike to the adjacent moraine summit. We disembarked via IRBs and as we rounded the ship we saw Santa climbing the ladder into the bridge window – he apparently arrives early this far south.

The crew landed us amongst small icebergs and had literally laid out the red carpet up the glacier worn granite.

The hike was only couple of km return, straight up through a track winding through the tightly wooded hillside of Lenga trees and berry bushes. Over rock, and through mud and more mud, interspersed with water, and ending with us rock hopping boulders to the summit (explaining why the crew had discouraged a number of the other passengers from attempting it). A spectacular view from the top across to the glacier, but also down the channel to the ship and Beagle Canal. After that ‘ordeal’ we were greeted back at the red carpet for hot chocolate and whisky (the sun had just passed the yard-arm).

In securing a group shot of us motoring away from the glacier on the IRB back to the ship, the friendly guide Rodriguez, with his bald head and bushy beard, stepped back on his mirrored RayBan sunnies, crushing them flat— we all felt very sorry for him and the look on his face clearly showed his loss!

Our afternoon excursion this afternoon was supposed to be to Garibaldi Glacier, however the 40 – 50 knot winds were too strong for the boat to navigate up the fjord, so we turned around and went back the way we had come in the early hours of the morning, along the Beagle Chanel to see the glaciers of glacier alley.

Glacier alley has at least five glaciers that plunge down to the edge of the channel from the South Patagonian Ice field on the Darwin range. The Beagle glaciers were named after five European countries by the 19th century explorers who documented the region. They named them Holanda (Holland), Italia (Italy), Francia (France), Alemania (Germany) and España (Spain).

We had spectacular weather, although still windy, but it was sunny up on deck for us enjoy the vista.

There was a screening of a documentary of Ernest Shackleton expedition to the Antarctic in the late afternoon followed by boat bingo. We were all given a 5×5 places board and 2 crew members would try to simultaneously call out the numbers in Spanish and English. There were 3 prizes; the first to get a horizontal line, the first to make an ‘X’ on the board and finally the first to fill the board. William won the last prize! He felt so proud winning “Cruise ship Bingo” as he called it. Fierce competition. 😉

As Christmas is celebrated Christmas Eve we sat down to christmas dinner on the boat at 8.30pm. Santa arrived and gave presents to all the children. Kate was the first to be called, which caused much worry on the faces of our other kids. However the cut off was obviously 13 as Abi, WIll, Bel and Izzy missed out – much to their relief

Then it was up to the Darwin lounge for some Karaoke. The crew led the charge trying to get as many involved as possible, a family with 3 daughters in their 20’s got into the spirit and then the Brazilians joined in and they were not shy 😄. Eventually Izzy, Bel, Will, Abi and Kate chose ‘Africa’ by Toto to sing 🎤. Great performance but no one else on the boat knew the song.

Christmas morning dawned cold, grey and rainy. We put on all our layers for our disembarkation at the glacier. We strolled 1.5km along the rocky beach and around the bend to Águila Glacier. Along the way Roger explained how the cruise company was involved in scientific monitoring of the flora and fauna in the areas we were visiting. Australis is the only cruise line visiting these waters.

We saw condors circling above, we tried native celery and found the famous Calafate berry.

Hot chocolate and whiskey at the end was very welcome.

Boat life was better than expected, apart from the coffee. The rooms were more spacious than we were led to believe given there was three to a room. Despite the lack of wifi there was plenty to keep us entertained. There was a tight schedule of briefings, safety instructions, eating, shore excursions, drinking and yet more eating. However there was still time for cards, bananagrams and resting.

There were 120 passengers and 70 crew on board, representing 19 different nationalities and 12 different languages. At dinner on the first night, happy birthday was sung in all 12 languages at once.

The three school leavers enjoyed a taste of freedom at the “free” bar while Abi and Kate made good use of the hot chocolate machine and the never ending pringles and olives.

Nat and Simon bought the navigation map at auction to commemorate this ‘epic voyage’, and pastry chef, Luis, made Izzy an early birthday cake.

We went in the IRB to visit Condor Glacier.

Today was the final day of the cruise and we had an early start for our last excursion to Magdallena island. The island is home to 13,000 pairs of Magdellenic penguins as well as many seagulls. It was a glorious morning as we disembarked on the zodiacs. On the island we had to stick to the path and give way to penguins at all times as they made their journey down to and from the ocean for food. The penguins on the island dug out burrows in the ground and picked grass to make nests inside the burrows. Breeding season was in full swing and many nests contained one or two fluffy brown chicks that seemed to be bigger than their parents. We all feel in love with these waddling birds, it was a great way to end the cruise.

We then disembarked at Punta Arenas and were greeted by an enthusiastic tour guide who spent the 3 hour trip to Puerto Natales reciting facts that we had heard more than once. He made sure to repeat the details many times to ensure we all understood. After checking into our hotel we had a trek briefing with our guides Javier and Sebastian. It didn’t seem particularly difficult, our guides seemed lovely and we were optimistic for the coming days. Javier recommended a restaurant, but pointed us in the wrong direction. Once finding it we realised that a group of 9 isn’t easy to seat in a shipping container restaurant so we find a hamburger place. We were glued to the TV in the restaurant that was playing the men’s junior free ride skiing championships in Austria.