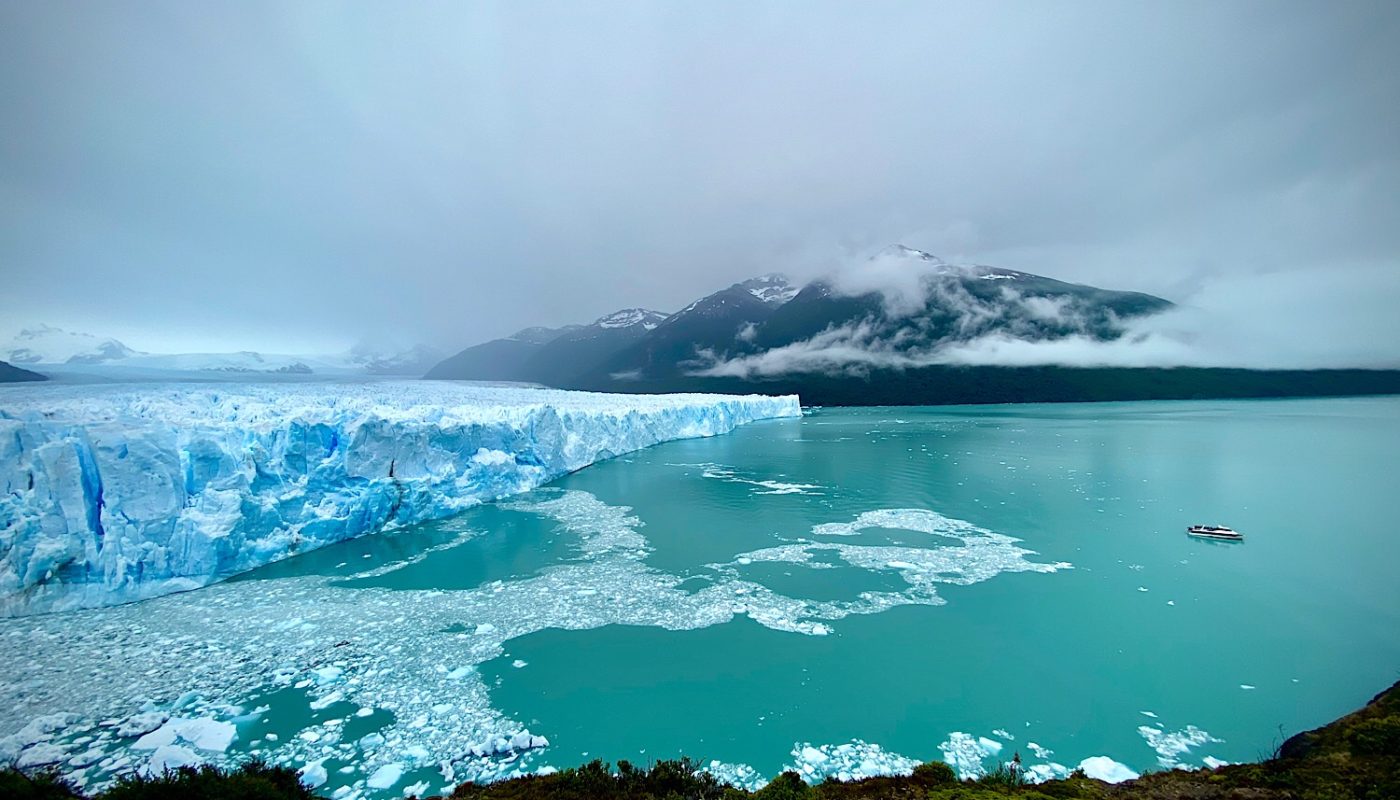 We woke this morning to torrential rain, 10 cm had fallen overnight, apparently quite usual for these parts. We had timed our trip to the falls perfectly. The flight from Iguazu to Buenos Aires and then onto El Calafate (our first stop in Patagonia) was uneventful, but distinctly lacking the meal service we were promised.

The landscape, as we flew into El Calafate was in complete contrast to the jungle we had just left. Snow capped Andes in the west, 120km long Lago (Lake) Argentino below surrounded by treeless steppe. El Calafate, which is home to 35,000 people, is largely a tourist town, which serves as a base for people visiting Los Glaciares National Park and the Perito Moreno Glacier.

Los Hielos Hostería is our home for the next 2 nights, with a beautiful vista over Lago Argentino with its resident flamingoes and grazing horses.

El Calafate’s main street provided plenty of choice for dinner and shopping but we couldn’t go past the whole lambs roasting in one of the windows. Wills ate yet another T-bone steak bigger than his head and we were entertained by flamenco dancers. We managed to pass the time waiting for our meals with a game of ‘Tomorrow I am going to the glacier and I am bringing…’ 27 items as it turns out.

The sun was setting as we headed home from dinner at 10.30pm.

After collecting our lunch packs we headed off to see what makes this area so famous. Forty minutes in a bus to Puerto Bandera to board Cruz Del Sur. It was cold and rainy so any time on deck was pretty short lived as we acclimatised to the much colder conditions. We sailed down one of the arms of Lago Argentina to Bahia de Toro (Bull Bay) to see the beech forests and waterfall. It was drizzly but a quiet and atmospheric place perfect to skip shale rocks across the glacial silt tinted water. Next stop was Cerro Negro (Black Mountain) for a walk through the forest where there was plenty of wildflowers to capture Simon and Tania’s attention, edible berries and hanging glaciers.

The Patagonian ice field is the third largest in the world after Greenland and Antarctica and the Perito Moreno glacier is one of the only ones in the world that is stable rather than retreating – presently right across the lake hard up against the tourists vantage point, with a channel tunnelling under it close to the edge for water for the snowmelt on the Western end to escape down the valley. The glacier advances an average two metres a day and progressively calving into the lake. We were told to expect to hear the glacier “cracking” and to see some small pieces of ice fall into the water while we were there. The day was still quiet rainy but we were happy to all come out on deck as the boat slowly cruised along the face of the glacier which is 70m high and 5km long. We stayed at a safe distance, as a few years ago a number of tourists were killed by a large wave caused by a falling piece of ice.

We disembarked and walked along the point of land opposite the glacier which brought us to even closer vantage lints from which to watch the calving. It was an amazingly addictive experience, standing with cameras poised at the ready to capture the next piece of ice crashing with a gun shot down in to the water. We were almost scared to walk around to the next viewing platform in fear we might miss something. We were lucky that the rain seemed to be causing an abnormally high number of calvings according to our tour guide. We all went at our own pace and ended up separated. Then it happened. A massive piece of ice 70m high broke off, spraying ice a couple of hundred metres across the water and causing a huge wave. We all managed to be watching it (Abi filmed it) and we all cheered along with a very happy group of fellow tourists. This is what we had come to see and nature did not disappoint us. We all agreed it had been a very special moment to witness and was well worth the effort to get here.