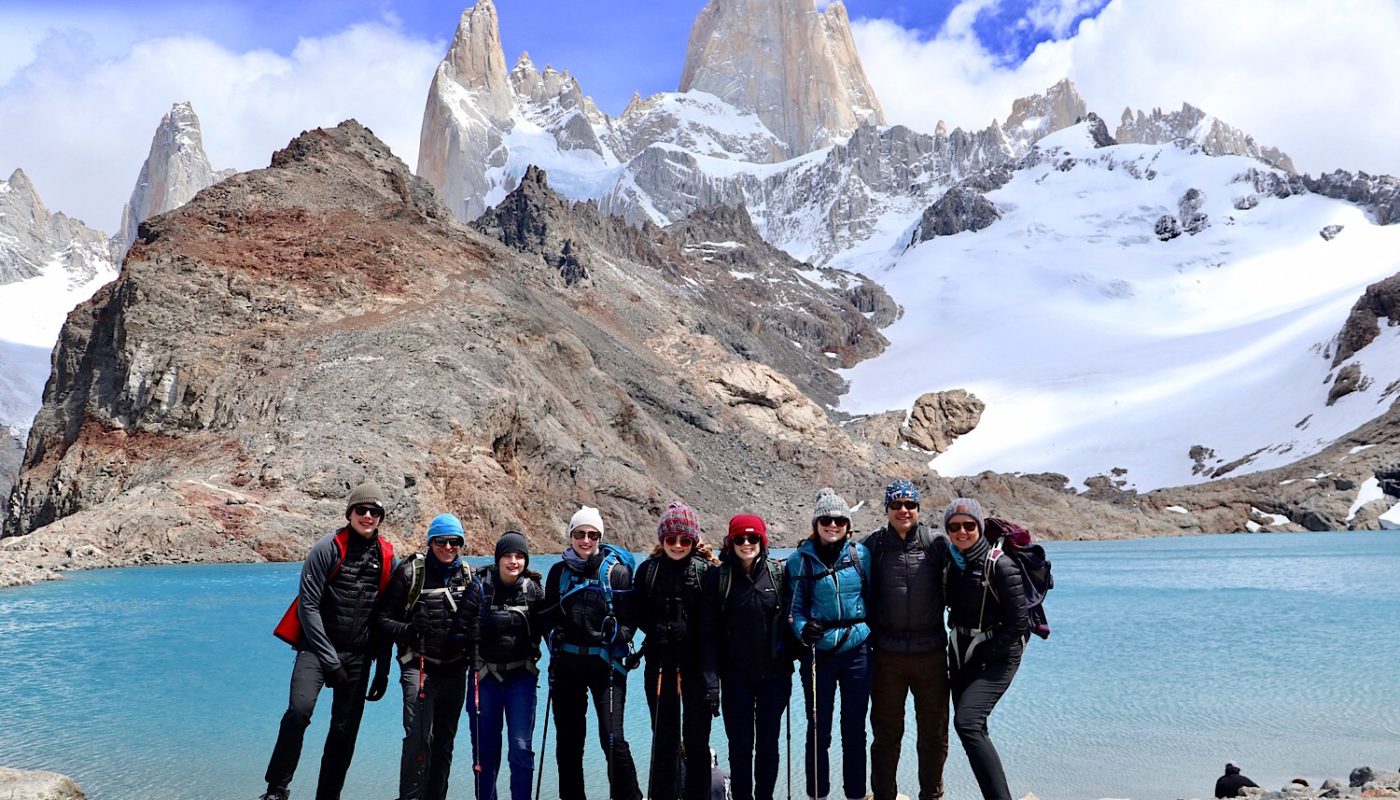 We were picked up at 7.30am for our transfer to El Chalten which took us along the famous ‘Route 40’ with a stop at Parador La Leona (Roadhouse) built in 1894. This is where settlers had to wait with their animals to cross the nearby river on a raft. Three ‘Gringos’ stayed here in 1905 for 3 days and were later identified as Butch Cassidy and the Sundance kid and his wife, on the run after one of their bank robberies.

Our arrival into El Chalten was cold and wet, but most striking was the unrelenting wind, which we were told is quite normal for this time of year. We couldn’t see the famous Mt Fitz Roy and were a little concerned that we had come all this way to do a walk in the rain and wind and never see it. The town which sits at the base of the mountain range was only established in 1984. It was like something from the set of a Wild West movie with a single Main Street lined with ‘saloons’. Most of these bars and restaurants are only open in the summer tourist season when everyone comes to walk the los glaciers park and some to climb the famous peak.

The weather gods have smiled on us again, the day was fine and cold with the ever present strong westerly wind. Our guide Aime collected us at 7:30am and we were driven to the start of the walk at a private hosteria El Pilar. Rio De Los Vueltos was to our right as we ascended the valley through an unexpectedly lush lenga forest. Through small clearings we started to see our goal for the day, Mt Fitz Roy. The first part of the walk was fairly easy going but with high winds still present we had to stop at the start of the ascent and decide if it was safe to continue. With a green light from our guide and removal of several layers of clothing we were ready to start the climb. Mt Fitz Roy was originally named Mt Chalten (smoking mountain). It appeared to have it’s own cloud that constantly swirled at its peak. Despite this it was a clear day and many others were enjoying the spectacle. We ascended 400m over 1km at a fairly slow pace due to the water flowing down the loose rocks, giving way to descending hikers and Kate having a cold and not feeling her best.

The scale of what we saw is hard to describe and the photos can’t possibly do it justice. Lago de Los Tres, an aqua lake (3 days ago it was frozen over and a dull grey) sits at the base of the 3 mountain peaks, each with its own glacier, a waterfall drops from it down to Laga Sucia, an azure lake below. Condors circled as we found a necessary wind break to sit behind to enjoy our packed lunch with the stunning scenery and interesting cloud formations. We stayed for an hour taking it all in and surprisingly for us not spending a lot of time taking photos. It was a special moment that will not be forgotten.

It was even busier on the way down and just as hard going. The variety of hikers was interesting. A man in a singlet shirt with a newborn baby on his back, a guy in Dunlop volleys, hard core hikers with massive packs awash with ropes, mountain goats in shorts running up the mountain, a lady at the bottom of the climb exclaiming to her boyfriend “are we nearly there, it can’t be much further!”.

Eight km back to town along the base of the mountain past the house of the first settler in the area (A. Madsen) and we were glad to sit down and take our shoes off after 24km and total vertical of just over 1000m. The children could not be moved again so stayed at our hotel for dinner, the four of us went out to La Tapera for yet more steak and Malbec followed by the house liquor.